Showing posts from June, 2016
Show all

A computer processes information only in the form of numeric discrete units. An ordinary photograph can be considered as an analog representation of a scene , where information is recorded as a continuous stream of tones and colors.  To switch between a representation of this type in a digital image, those dots must be converted to into what might be called a mosaic of pixels, where the brightness of each one matches the brightness of the corresponding analog representation area.  The word pixel is short for picture element which is the smallest element of an electronic image. This can be compared, within certain limits, to grains of photographic emulsion.  A pixel is basically a tiny light-sensitive metallic element, that reacts in the presence of light, generating an electrical signal. Associating a number to each of these signals, it becomes possible to reconstruct, using a computer, a digital image. To "scan" an image were used tools such as scanners, video
Post a Comment
Read more 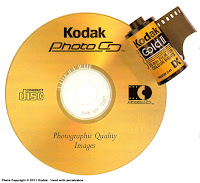 In the late 90’ you could purchase a whole encyclopedias on CD ROM. Optical discs replaced dozens of kilograms of printed paperand users could search by subject or keyword systems.  These devices were also considerably more efficient than the usual index which we fond in a printed volume. Similarly a Photo CD could store a hundred photographs. Each image contained in a Photo CD could have been printed and you will have not noticed differences between a traditional picture, printed by a minilab and that obtained from a digital file.   In fact, even though the digital technology might have seem very advantageous, the real problem was the final image’s quality. An ordinary photograph contains, generally, a amount of information that is equivalent to about twenty million points, each of which has its brightness and a certain color.  The electronic version of the same image should therefore consist of a 20 million pixel to get the same level of quality. In trut
Post a Comment
Read more
More posts