From Analog to Digital Photography

- May 30, 2016
Regarding the activity of the photo labs, every year were exposed about 1.2 billion square meters of photographic paper. The 12% is professional photo labs, the  Treaty 42% 46% in minilab and industrial plants in photofinishing. 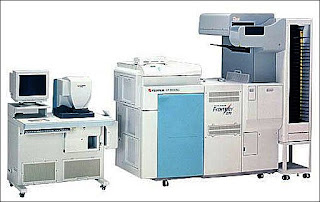 Minilabs had opened new perspectives on work and earning. With an investment of approximately fifty thousand dollars, back in the 90′, you could buy a piece of equipment that can operate with good effectiveness in the field of digital photography. For example, you could retouch photographs or print these out of unusual materials as the custom shirts. It is possible to affirm that chemical photography, almost necessarily, were accompanied by the digital according with the demands of a constantly evolving market that claimed better quality and a significant reduction in costs.

The versatility of the new media,  allowed everyone to overcome those who have represented the limits of analog photography
Limitations that arose from the difficulties and sometimes the impossibility of carrying out a negative unsuccessful; by technical problems, physical and chemical tied to traditional systems such as incorrect exposure, non color control, upright,
not distortion and “difficulties” in getting the combinations of subjects incompatible.

Creativity in the design of photographic images was not necessarily threatened by the advent of new digital techniques indeed, being able to work digitally, the limit at which will no longer be possible to intervene on a photograph will be placed by the same operator. These must be first of all a total mastery of technique as well as a good knowledge about hardware and software systems available. This was to reiterate the photographer at who will determine the quality of the image.
However, the needed to take into strong consideration of being confronted with images peddled for photographs but, that in truth, they are not. Today we find a great number of photographs, in all kinds of printed matter, from newspapers to encyclopedias, from brochures to billboards. Whereas once printed, a very little remains of  the original image, in other words,  from the impression of photographic film, one can ask whether even the photographs that appear in newspapers, for example, printed with a coarse screening should be considered other than those completely made with digital techniques.
A film could record more accurately an image than a digital system, but lots of information, such as gradients, highlights, shadows,
details were  systematically reduced at each operation, starting from the negative print on photo paper.
Technically, to get a photo, you must hold a camera, insert the film, set, if required, some  parameter, frame your subject and finally press the shutter button. At this point if you don’t use an instant camera , like Polaroid or you do not have a dark room , you must contact a developing and printing lab to see and use the images.

More than a few problem arose when the number of images to manage became hundreds or thousands.
So being able to sort and keep tabs on a large amount of images is a rather difficult task.
Digital Photography History